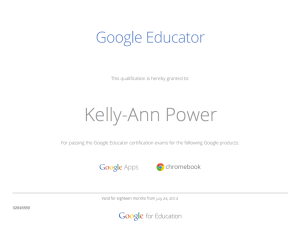 My main purpose is to increase my knowledge base and figure out how I can help create a Google School … a Schoogle (a favourite term I must give Doug Sadler credit for) where I could help staff and students alike get more Googley too.  So I decided to become a Google Educator.  And that’s more than good enough for me.

This venture involved taking part in 5 different learning modules from Google for Education:

The learning modules were packed with great information that was highly applicable as an educator. But the exams were a little ridiculous (providing great cognitive dissonance for a recent A&E consultant) with 60 multiple choice questions in a time crunched 90 minutes, with 80% as a pass. Remember the ones? A & B, B & C but not D, All of the above, Only three of the above, None of the above? Talk about craziness for second guessing yourself!  I must say that this test environment kept me on my toes, with my heart pounding for the entire 90 minutes, with the little voice (OK… very loud take-over type voice) telling me “You must pass! You cannot fail!” the entire time.

The good news… we’ll be on our way to helping staff and students become more Googley come September!  I’m open to any suggestions from Administrators out there who use the Google platform to organize their schools.  Please share any ideas and I promise to go slow 🙂

Now… where to begin? 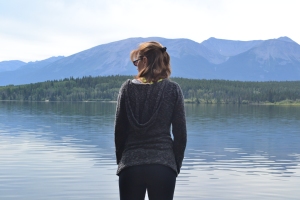 My problem is… I overthink things.

I overthink things to the point of not even beginning something that should be a relatively easy task, if I were to just begin. I am constantly trying to think of an even better way to begin or set things up or roll out a plan. To the point of sometimes sitting very still for a long time.

A few weeks ago, I was quite geeked to be a part of a 4 day professional learning experience involving a “Google Bootcamp” and a “Google Summit”.  Many ideas streamed by me for 4 days at lightning speed… people sharing ideas… apps to try… extensions to add to Chrome… and solid pedagogical practices that were shared.  For 4 days, I tried to organize it all in my head and figure out a strategic way to implement some of the possibilities with my staff.  I struggled with how to “dial it back” a notch to begin at a reasonable speed.

I had a great discussion tonight with a few colleagues as we shared and brainstormed about “what would be the best way” to share ideas with our staffs regarding curriculum, pedagogy, and integration of technology.  We shared our ideas of our weekly newsletters that are sent electronically.  We shared our attempts at organizing blogs according to strategies we see in our schools.  We shared our face-to-face discussions.

And then I started to talk about my vision of how I’ve always wanted to start a separate page on my website that I could begin sharing weekly ideas with my staff, that would be archived online for future access as well.  And as I listened to myself say “I’ve always wanted to do that, but haven’t figured out a way to organize it all yet”, I realized that I could be putting it off for a very long time.  I stared into space for a brief moment, and I realized… stop trying to organize it all and just begin.

The process just repeats with me.

It’s the timing of each that seems to vary with me.

What have you been spending too much time organizing your thinking around? What can you begin tomorrow?

It’s time to get back to my professional goal of online digital content creation. It seems that I was much more effective at this BTW (before thesis writing). And so now that I have completed my Masters in Education as well as my thesis, I feel as though I can move on with my professional learning goals as a Vice-Principal!

Recently, our staff contributed to a Professional Learning Goal wall of excellence in our front foyer, as a way to show our students and our parents that learning never ends.  The goal I chose to display was “to further support staff and students in using technology effectively in the classroom, where students create content to share with others”.

And so it begins.  I remember listening to an audiobook by Ed Bliss called Getting Things Done.  He mentioned that “the difference between a wish and a goal is very often a number and a date”. I have been wishing I could find more time to work with students and staff on specific content creation projects.  And so now I have turned them into goals.

One goal is to work with a group of grade 8 students and our specialty computer teacher in order to create Learning Skills and Work Habit videos that have a student voice to accompany the teacher resources previously worked on from a teacher’s perspective.  We are hoping to have these done in the next couple of months.

Another goal I have is to work with a group of 20 grade 5 students in order to create an awareness video in honour of World Autism Awareness Day on April 2, 2014.

There.  It’s in print.  I must complete them.  What goals have you set for yourself? Have you written them down, with a number or a date?

I was super excited to have the opportunity to present a Keynote at the Infusion, 2011 Conference in North Bay this weekend.  Being a “northern girl”, it felt like I was coming home to the Great White North.  But far beyond connecting with the North again, it allowed me to share a little bit of what I love doing most…  working with aspiring teachers, and sharing experiences of what I have learned in the classroom, through my connections with kids.

The framework for our presentation (co-developed with @benhazzard) focussed on thinking about the infusion of technology into your classroom following a gear-system approach of:

1.  Think it – What is your key learning purpose?  How do you plan on infusing this technology to meet with your pedagogical purpose and student learning goals?

2.  Find it, Bring it – If you don’t have access to your “ideal piece of technology that you envision”, what could you use instead?

4.  Learn it – Reflect on what works and what needs to be tweaked.  And start the process again.

The essence of the gear framework is that you can jump in at any point.  And the turning of one gear, builds momentum in the other gears and allows the learning process to unfold.

So as you reflect on the pedagogy behind one piece of technology you are currently using in the classroom … forget about the shiny features of this technology …  What purpose is it serving in your classroom? 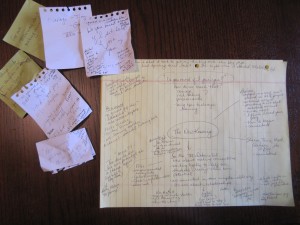 This is how I think.  This is what it took to get the thinking out of my brain and onto this blog post.  It has been one week since I attended TEDxOntarioEd.  One week of sticky notes scribbled in the car (yes, while driving), more tiny papers shoved in my backpack during meetings, many conversations with colleagues and finally one organized mind-map tonight in order to try to capture everything that has been spinning around in my head, in no apparent order.

TEDxOntarioEd offered many inspiring speakers who were able to move me in both professional and personal ways.  I truly enjoyed how @JesseBrown touched upon the value of visuals for many of our learners.  He was able to take an idea and bring about its brilliance in order to touch our students in the classrooms today through Bitstrips.  I also enjoyed listening to @zbpipe share how her mother was one of her greatest inspirations in her career, and connected with that.  I was also moved by @Timthestudent and how brave he was to stand and deliver a message to teachers on how he would appreciate to be viewed as a student.  Does he realize his own potential as a change agent?

However, one of the greatest personal reflections of the evening came through an adlib segment from @danmisener who shared a story involving a root canal and how it relates to why we do what we do (you might have had to be there – but you can listen to a podcast here that @benhazzard has captured).  Do we do our best for someone else?  Or do we do our best just because it’s the right thing to do for ourselves?

An equally exciting facet of the whole evening was connecting with people I had only met online through Twitter (insert eye roll now if you have to – I’m getting use to it).  There is no way to explain what it felt like when @KimMcGill tapped me on the shoulder with that quizzical look saying “Kelly?”  Our eyes met, there was instant connection, the smile and then the hug.  We had only communicated online and it was as if we’d known each other in so many ways.  Then to meet her daughter @MegaTronMcGill and let her know how much I appreciated the Flickr pictures her mother had been sharing.  I’m not sure she was impressed that I had seen her in that way, cupcakes and all, but it helped with the connection.  Others also commented on my own children – on Julia’s intense energy level and Jesse’s highly reflective nature.  And nobody had ever met them.  All this “knowing” was learned over the net.  Together we marveled at how many of us were meeting for the first time.  You heard things like “Oh, @digitalnative is over there, or @aforgrave is over here, or @MindShareLearn guy” – not Colin, or Andy, or Robert, but their twitter names.  That’s how we knew each other.  I’d see two more people introduce themselves to each other for the first time F2F, and then realize they hadn’t met before either.  Wow.  It was just mind-boggling.

This was further magnified later in the evening when I was engaged in a very comfortable conversation with a colleague regarding an A&E project after the event.  That’s when @grahamwhisen came up to our table and asked “Do you mind if I join you?”  That comfortable conversation turned awkward for a moment.  It was awkward until we filled the time with a sharing of nametags and twitter names.  That turned into “Oh, I think I read your blog recently” and then all of a sudden the connections were made.  We “knew” each other.  This resulted in a fabulous conversation throughout the evening with @Sharon_Drummond, @Terrentius, @MattWalkinshaw as well as @grahamwhisen who decided to blog about this new phrase “The New Way of Knowing”.

For me, TEDxOntarioEd was about making connections.  Making connections in my professional role, with people I had either met through work, or on-line, in a forum where we were all gathering with a common purpose.  The purpose was to further discover how to motivate our students to realize their greatest potential.  At this event, I felt that everyone in the room was connected in an unexplainable way.  And it reminded me that it’s all about relationships.

How do we teach our students that it’s all about relationships?  How do we teach them the courage to sit down at a table filled with strangers and take that risk to say “Do you mind if I join you?”  Imagine the learning involved if we could teach them to just embrace those opportunities to connect and learn from others around them.